part of the exhibition Cultural Capital at Bildmuseet, Umeå Sweden 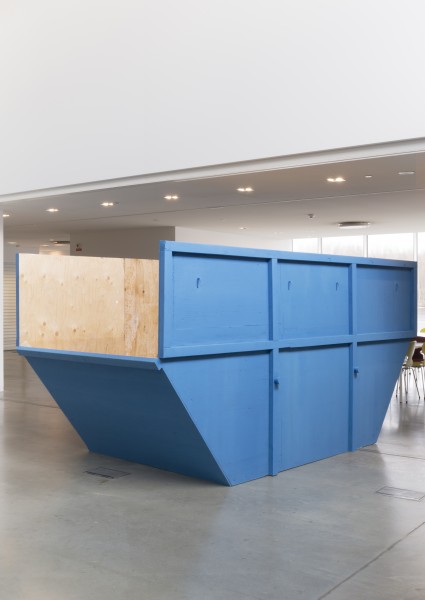 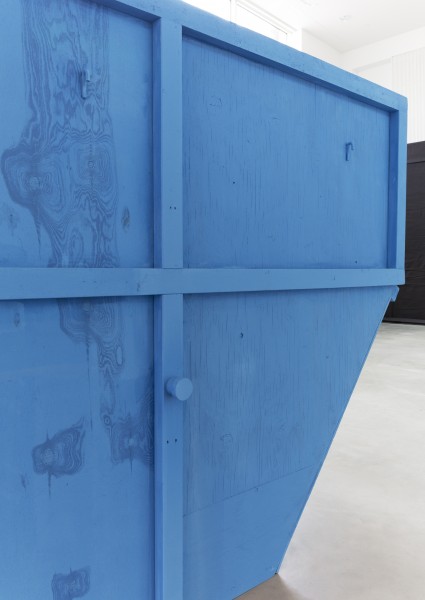 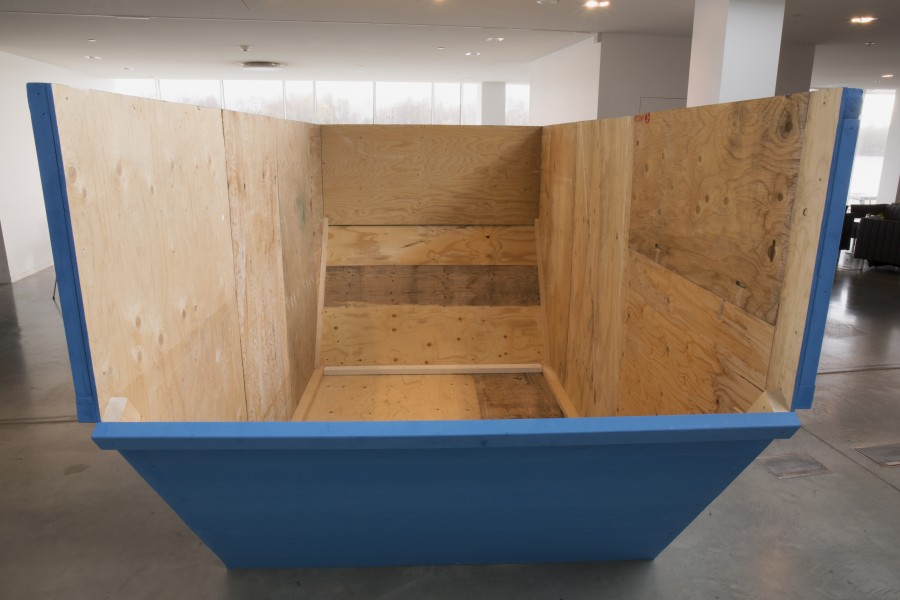 event:
Secret Agent: What Does a Container Mean and What Can it Do for You?
Walk & Talk

-with the artist
-open to all, approx. 20 min
-english / swedish

Event starts from the exhibition and the sculpture entitled Secret Agent.
Moving through and looking around the Umeå Arts Campus institutions, Bildmuseet being one of them,
investigating the streams of waste from the area –  the garbage containers being vessels for this export. Discussing the subject of trash and the subversive act of picking up rubbish from both pragmatic and philosophical angles. Taking up questions like the origin of waste, why is it trash, where is it going and what might it be used for. 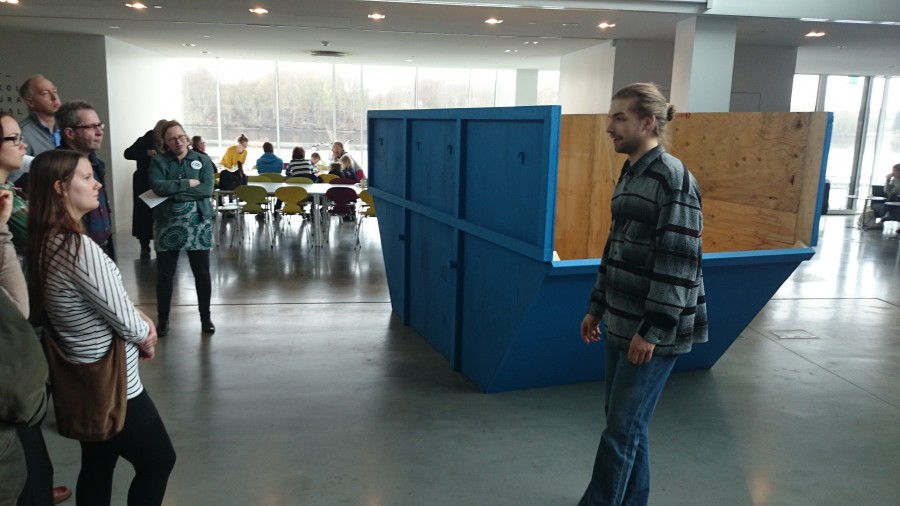 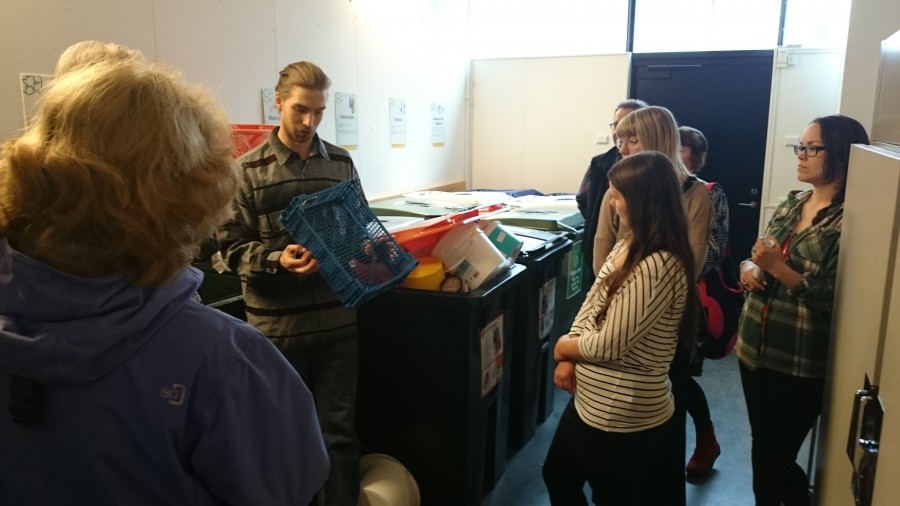 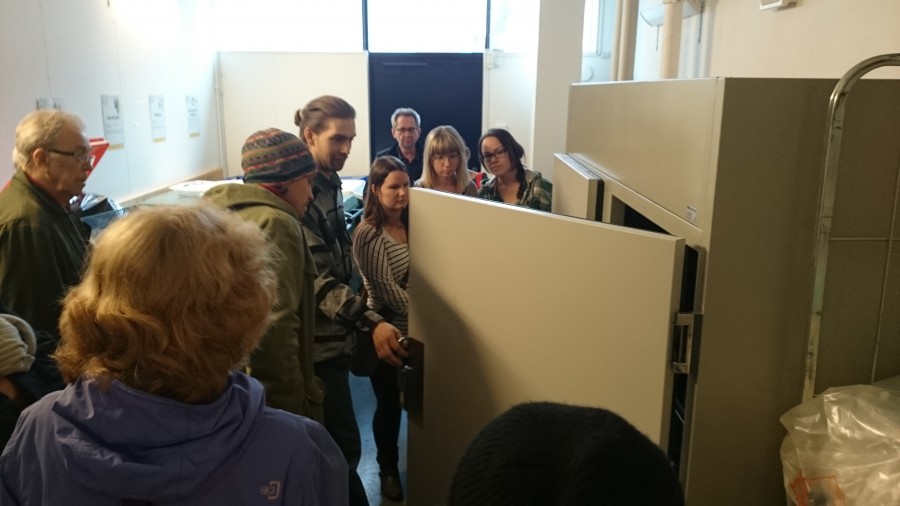 The ways of a Secret Agent

I did a container: A life-size copy of an generic large waste container, also called a skip. This reconstruction is created out of material found and retrieved from the same kind of garbage containers that serve as the original model. My replica is made out of wood and plywood instead of steel.

The trash container as a vessel of transport, with its ability to dispose of undesired material, is a integral part of both mental and concrete infrastructure in our modern life. A container is the physical agent enabling the current mode of operation in society, both on a global scale as well as in the specific situation of, for example, an art academy. Although crucial to the modern way of living, the container still seems invisible to us. Despite physically blocking our path and view, claiming space on sidewalks and streets, we rarely scrutinize it. It is part of the clandestine web of waste infrastructure. Unlike the literally unseen sewage system, also a man-made broken cycle crucial in enabling our lifestyle, the trash system is covert on a psychological level. Being embedded in the routines of everyday life, it is simple for us to take out the trash without reflecting on it.

The man-made phenomenon of waste: The broken cycles of a city – container as the appendix in its metabolism

Containers are for trash, trash is something dirty, useless and unwanted, yet we are the actual creators of this bad produce. Waste is something we produced, altered or displaced so that it is not biodegradable. The core meaning of consumption implies a effect of destruction – something is consumed, permanently altered, lost. But since nothing can just disappear, waste is created. Thus waste is a remnant, something changed through an action. An action of me throwing or a café disposing of yesterdays sandwiches In the cycles of the natural world, separate from our synthetic ones, the waste always translates into a resource, nourishing something else, being consumed once again. Cradle to cradle as this principle is called, lately adopted by corporations interested in greening their production through trying to create less waste.

I find an intriguing similarity in the mechanisms of transformation in the concepts of both art and trash: As any kind of “art space”, a gallery or a museum, has the transformative ability to make art appear – an object placed in the white cube instantly becomes art. In similar manner anything placed in a garbage-container, trashcan or waste bin can not possibly be anything else than trash. Both of these transformations are mental constructions linked to the concepts of art and trash, taking place in the subjective mind of the viewer.